Last night's County Council hearing on the future of King County Metro was an event of epic proportions.

This photo taken by our friend Jenn Olegario tells the story of how many people wanted to testify.  The line was over two hours to get into the ill-equipped County Council chambers and the testimony supporting the congestion reduction charge lasted until 10:30pm. 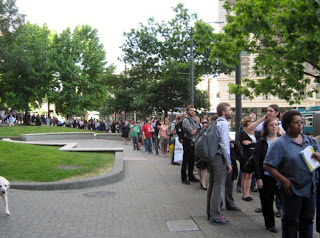 The main story lines from last night:
Here has been a lot of coverage on this event from king 5, Seattle PI, Seattle Times, and publicola.

I testified to the partial council and delivered the nearly 2,000 emails that all of you sent in to support the measure.  Thank you for your support and please visit www.stopbuscuts.com to keep the pressure up!

A lot of people were livetweeting the event, to see a good rundown check out:
@ericacbarnett
@transpochoices
and @seattletransitblog
The main hastag of the day being used was #savekcmetro
Also check out Oran's flick of the evening http://tinyurl.com/5vvj4ye 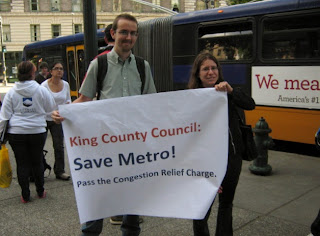