This Month's Friday Forum: Get Onboard: The Future of Intercity Rail in the Pacific Northwest

Capital rail projects that will increase service on the Amtrak Cascade corridor got cut in both the House and Senate Transportation Budgets. We will be holding a timely Friday Forum this week on the future of intercity rail in the Pacific Northwest. I hope you can join us!

Transportation Choices Coalition’s April Friday Forum
Get Onboard: The Future of Intercity Rail in the Pacific Northwest

This month’s Friday forum topic is intercity rail in the Pacific Northwest. The discussion will focus on how we have gotten to where we are at today and opportunities for future rail expansion. The Federal Recovery Act approved 8 billion dollars for high speed rail; how is Amtrak Cascades positioned to receive a portion of these dollars? Could 110+ mph rail between Seattle and Portland be in the foreseeable future? What can you do advocate for high speed rail in the Northwest? We will address all of these questions and more at our April Friday forum. Bring your lunch and join the conversation.

Washington's Transportation Budgets in the News

Last week the State Senate released their Transportation Budget and yesterday the House Released their version.

The release of this budgets has already caused quite a stir in the media.

The Seattle Times reported today, "State budget cuts could hit I-90 light rail" . The current version of the budget does not fund the state's agreed upon contribution to doing the reconfiguration of the I-90 bridge that is needed to build light rail to Mercer Island. TCC's own Bill LaBorde was stated in the Seattle Time article, "I think it is a betrayal to the voters, especially Eastside voters who are counting on the commitment to get rail."

Seattle Transit Blog has a more in depth post on the unraveling story here.

Make no mistake, the lack of state funding for R8A configuration over I-90 would be a direct blow to the light rail that Eastside voters are counting on. TCC will continue engage the Transportation Budget process and advocate for our issues. We will be releasing a coalition letter to the House and Senate Transportation Committees in the next couple of days, which I will put up on the blog.
Posted by Andrew at 10:01 AM No comments: 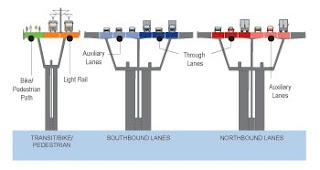 There are various projects in Washington that TCC is involved with, including the Alaskan Way Viaduct and the 520 Lake Washington Bridge. Another large project that we will be getting move involved in over the next few years is the Columbia River Crossing, new I-5 Bridge from Clark County to Oregon. The project website is http://www.columbiarivercrossing.org/

Demonstrating the statewide significance of this project, The Columbia River Crossing recently got some blog/press coverage from the other corner of the State in the Bellingham Herald's "Traffic Talk".

The current design for the bridge has a light rail and pedestrian element which is great news. It also calls for 12 lanes of traffic, on face value this appears to be an excessive and expensive capacity expansion for the corridor especially considering light rail will be coming across the river. That said, we will continue to track this project, engage local leaders in Clark County and keep you informed of its progress.
Posted by Andrew at 10:08 AM 2 comments:

It has been a tough couple of weeks in Olympia in regards to Transit Oriented Development. That said, here is a great quote from Urban Land Institute that I stumbled across on the Smart Growth America Blog. Take a look at the post here.

From the Urban Land Institute's "Emerging Trends in Real Estate" report in 2007:

A few weeks ago I attended the Seattle Great City Initiative Kick-Off. The event filled up the South Lake Union Amory with a bunch of urban, environmental, pro-bike and transit advocates. I was tabling in the back next to our friends at GGLO. Streets for People made a video on the event and the TCC table was featured in it.

Hans and Shannon, two soon-to-be-married bus types from Capitol Hill, have officially declared March 18th Bus Driver Appreciation Day. (Apparently, there is no such official day--at least not one that they could find record of.) I, for one, am totally on board (sorry, couldn't resist) and ready to help make it happen. Since this is a new thing, we get to decide how it works. Here's what I'm thinking:

Next Wednesday, tell every driver whose bus you ride, "Happy Bus Driver Appreciation Day!" Make sure to keep smiling, even if they all look at you like you're crazy. If you have a favorite driver, consider bringing him/her a card* or other token--nothing that would be hard to keep on a bus all day, just something small** to show your love.

So, my fellow riders: Go forth, and appreciate. And oh yeah: Pass it on!

* Note to Hallmark: In case you missed the headlines: More people than ever are riding the bus. Don't sleep on this opportunity!
Posted by Andrew at 2:04 PM No comments:

This announcement was released recently by Seattle Councilmember Sally Clark. If you live in these areas and care about urban planning especially near the light rail stations coming online, I highly suggest you attend the event in your neighborhood!

If you’ve ever thought about parks, sidewalks, building height and design, affordability, equity… OK, what did I miss? Neighborhood plan status reports all over the city and plan updates in three quick-start neighborhoods are getting underway. Last year Council approved the funding. Now the Neighborhood Planning Advisory Council (NPAC) is up and running, neighborhood advocates are coalescing and city staff are drafting ideas. It’s time for you to plug in.

Three introductory community workshops to begin development of plan updates in the North Beacon Hill, North Rainier, MLK@Holly have been scheduled for:

Washington's Highway Stimulus in the news

Washington State's WSDOT highway stimulus legislation has been covered in the news with increasing controversy over the past few days. A report released by TCC, WASHPirg, and Futurewise is cited in many of the articles.

Here is the media rundown, feel free to let me know if I missed any:

Transit Agencies are facing with increasing demand for service across the State. At the same time they have large budget shortfalls due to declining sales tax revenue.

This significant increase in ridership continues as Pierce Transit experiences an unprecedented decline in sales tax collections (-7 percent from 2007 to 2008)."

I saw today in the Bellingham Herald traffic blog that ridership for the Whatcom Transportation Authority increased a remarkable 32% between 2007 and 2008.

From the release:
"Boardings, or one-way trips, reached 4.7 million, up from 3.6 million in 2007. Fixed Route productivity, measured in riders per hour, increased by 21 percent."

It is clear that demand for more transit across the state continues to increase, at a time while revenues for agencies are plummeting.

Update: Here is a good article from the Washington Post on increasing demand for transit nationally, "Public Transit Ridership Rises To Highest Level in 52 Years"
Posted by Andrew at 12:39 PM No comments:

This afternoon Governor Gregoire signed the final State stimulus package for roads which amounted to 350 million dollars in federal spending on roads in Washington State. TCC, Futurewise, and WashPIRG released a national report and press release in response to the final stimulus list that was put together by the Governor's office and the State Legislature. Copies of both the report and the press release can be found on our homepage. For a direct link to the report go here and for a direct link to the press release go here.

From the Press Release:
Two of Washington’s projects were highlighted as good projects on this list, the Pierce County I-5 HOV project and the combined I-90 safety and maintenance projects. Two projects, the I-405 expansion project between 195th Ave. and SR 527 and the Yakima Valley Mall interchange were highlighted as bad investments for $70 million or 20% of the state’s stimulus funding for transportation projects. In Washington alone more than 400 bridges are structurally deficient including the SR 520 bridge, South Park bridge and Murray Morgan bridge. These projects would have been very strong candidates for state stimulus spending.

This should be a fun event for an important transit mobility project in our region:

The celebration kicks off construction on the $1.9 billion University Link light rail extension from downtown Seattle to Capitol Hill and the UW. The site is adjacent to where the University of Washington light rail station will serve thousands of commuters every day.

The project is estimated to generate 2,900 direct construction jobs and economic activity equivalent to 22,800 both direct and indirect jobs according to a U.S. Department of Commerce model.

Light rail from downtown Seattle to Tukwila is on schedule and on budget to open in July. By the end of this year a direct light rail connection from Tukwila to Sea-Tac International Airport will replace the temporary shuttle connection that starts in July.

The State list for the Federal Stimulus transportation dollars is being heard on the House Floor right now. We have been testifying on this bill as it moved through committee and have been tracking it closely.

Information on the bill can be found at http://flooractivityext.leg.wa.gov/default.aspx?chamber=3


Update:
House Bill 1978 passed off of the House Floor with a 67 to 28 vote. It will now move onto the Senate for further consideration.

3:45
Things are moving quickly in Olympia today. The House Stimulus bill that moved out this morning just passed out of the Senate moments ago with a 45 to 4 vote. It will not be delivered to the Governor's desk. Moving the bill on the same day shows how high of a priority this legislation is.
Posted by Andrew at 11:43 AM No comments:

We are pleased to announce that our legislative priority is moving forward with strong support in both the Washington State Senate and House. Last week House Bill 1490 passed out of House General Government Appropriations with a strong 9-5 vote. Thanks to the leadership of House Appropriations Committee Chairwoman Representative Darneille and House Speaker Frank Chopp who garnered strong support for the bill, it passed the House fiscal committee with resounding support.

Last night the Senate version of the bill (SB5687) passed out of Senate Ways and Means with little fanfare or controversy. We would like to sincerely thank Senators Prentice, Fraser, Tom, Fairley, Keiser, Kline, Kohl-Welles, McDermott, Murray, Oemig, Pridemore, Regala, and Rockefeller for supporting this important environmental priority in Senate Ways and Means. If you are a constituent of one of these Senators please send them a big thank you.

Both the Senate and House versions are in the rules committee, which is the last stop before a floor vote! We will be making some friendly tweaks to the bill on the floor as a result of the stakeholder meetings that Rep. Nelson has been holding over the last couple of weeks. The floor cutoff is next week. We are working hard to ensure that the Transit Oriented Communities Bill gets out of the House in the upcoming days and moves forward on its way to becoming a law. Thank you for your support and for tuning in!
Posted by Andrew at 2:06 PM No comments: