House Bill 1490, Transit Oriented Communities, is being heard in the House Local Government and Housing Committee. The bill’s prime sponsor, Sharon Nelson, sits on the committee as do bill co-sponsors Reps. Geoff Simpson, Dave Upthegrove, Mark Miloscia. The meeting just started at 8am and HB 1490 is the second item on the agenda. The room is packed so stay tuned as I report on the testimony and the surely heated debate.

8:22am
Right now the committee is getting a report from Community Trade and Economic Development (CTED) on the findings that came out of the Land Use and Climate Change Advisory Committee. One of the Climate Change Committee’s primary suggestions was encouraging growth in Transit Oriented Communities. The proposed Transit Oriented Communities legislation grew out of the climate change committees work.

So far Rep. Miloscia asked CTED staff about how affordable housing was included in the CTED report.

Just moments ago Rep. Ericksen (R-42nd LD) asked a pointed question essentially questioning climate change in general and expressed his ‘interest in the cooling and heating on earth.’

Also note that if you go to TWV right here you can watch the hearing live on the internet, just click on the House Local Government and Housing Committee.

8:35am
Our friends at the Quality Growth Alliance are giving a presentation to the committee. In short; currently in Washington there is more demand than housing stock available in transit oriented areas and a shift to "compact, complete, and connected neighborhoods" will reduce greenhouse gas emissions and is the smart way to accommodate future growth.

8:44am
Rep. Miloscia brought up another question about affordability in housing plans that were presented. One of the presenters from the Quality Growth Alliance brought up the point that total household expenses include rent/mortgage and transportation costs combined. By creating compact transit oriented communities household transportation costs will be greatly reduced helping lower income families.

Rep. Ericksen then asked if we need these strategies if we have nuclear power and clean cars in play, thus solving all of our emissions problems. The quality growth folks essentially responded that smart-growth land use strategies are things we can implement to reduce emissions today.

9:00am
The hearing on HB 1490 is starting. House staff is giving an overview on the bill. There is one hour left in the hearing and 36 people to testify so people are going to have to race through their comments.

9:12am
The environmental panel is taking center stage. Bill LaBorde from Transportation Choices, Cliff Traisman from Washington Environmental Council, and Sara Nikolic from Futurewise. They are using a very spiffy and informative power point, which I will try to get up here shortly.

9:20am
The low income housing alliance testified in favor of the legislation. Their spokesperson, Nick Fredici, claimed that currently affordable housing planning around station areas is disjointed as best. He want on to stay HB 1490 will provide a good framework for ensuring affordable housing around high capacity station. Also the cascade bicycle club voiced their support.

9:30am
John Fox, director of the Seattle Displacement Coalition and anti-rail advocate, testified against the legislation. He claimed that HB 1490 would cause be a "blueprint for gentrification".

9:40am
The association of Washington Cities voiced some some concerns aroud manditory zoning rules and also stated that they are excited to work with the committee on the bill. The City of Bellevue stated that in many areas they are meeting the 50 units per acre but they are concerned about a "one size fits all" zoning approach. The city of Auburn voiced many of the same things as Bellevue. The Mayor of Tacoma, Bill Barsma, spoke in support of the goals of HB 1490. He notedthat we need compact communities around our high capacity systems in order to make them as efficent as possible.

9:50am
Sound Transit testified that they would want to continue to work with the committee on the bill. They also provided some background on their surplus properties and brought up some issues around the resale of surplus properties.

9:55am
A Seattle citizen said the bill would mandate densities higher that Mumbai, India, which simply is not true. We are talking about average buildings heights around three stories around the station area. Not quite the image I think of for Mumbai, India. Here is an example of new construction in Mumbai. 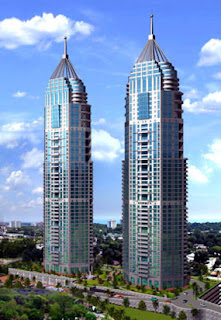 10:00am
The committee is going long so many of the Olympia lobbyists will have to testify at a later date. Chair Simpson is trying to ensure that out of town citizens have an opportunity to speak.

A Priest from Federal Way testified that he thinks Transit Oriented Communities would be great for the common human good and livable communities. Then the President of the WA Realtors claimed that Vehicles Miles Traveled (VMT) is a obsolete measurement of emissions. His logic was that cars no longer produce emissions thanks to the development of the electric car. As we heard earlier in the hearing transportation emissions are responsible for 50% of our state's greenhouse gas emissions.

The last two speakers were two Seattle citizens. Martin Duke from the South Seattle area where light rail will be travelling. He said he wants a more walkable liveable community. Another resident of Northgate testifed about the benefits of recently moving into a transit oriented development, where his family reduced their vehicles miles traveled by 50%.

I am signing off for now but stay tuned as I keep you posted on HB 1490 and its progress through the legislative process.

KUOW held a panel discussion on the transportation 2040 alternatives this morning on ‘weekday’ at 9am. For some background information on the Transportation 2040 process, go to the KUOW website to listen to this morning’s program. TCC will continue to track, engage, and update you on this important issue.
Posted by Andrew at 12:32 PM 1 comment:

I am proud to announce that the transit oriented communities bill has been officially filed! It is House Bill 1490! Click here to see all the important information related to the legislation. A full PDF version of the bill is also online here. There is a lot of excitement about TOC right now in Olympia and we are optimistic about moving it forward. It looks like next week we will have a hearing in the House Local Government Committee.

We would like to send a huge THANK YOU to our bill sponsor Representative Sharon Nelson from the 34th district. Her hard work on this legislation has been nothing short of amazing. Also, thank you to Reps. Pedersen, Goodman, Simpson, Upthegrove, Appleton, Dickerson, Liias, Morris, Roberts, White, Ormsby, McCoy, and Miloscia for co-sponsoring HB 1490. Stay Tuned!
Posted by Andrew at 10:45 AM 4 comments:

Right before I started at Transportation Choices, I had the great opportunity to travel through Ecuador for over five weeks. I spent most of the time on rural beaches, but I also had a chance to visit Ecuador’s two largest cities, Quito and Guayaquil. Quito and Guayaquil are both megacities with excellent Bus Rapid Transit systems. Their BRT systems were fast, functional, and popular for a few reasons.

· The buses on the BRT line have less than 5 minute headways so you never have to wait.
· The buses have their own dedicated right of way right down the middle of the road for 98% of the routes, making them often faster than taxis and cars stuck in the traffic.
· Their station infrastructure is highly developed, comfortable, and feels like a rail station.
· Similar to a rail station you pay when you enter the station so boarding the articulated buses is fast and convenient.

Enjoy the few shots I got of the BRT systems below. For a country with much less infrastructure dollars than the States, it is amazing how many people their high capacity transit infrastructure moved efficiently and what we can learn. 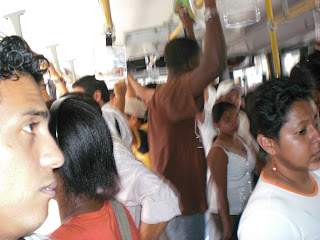 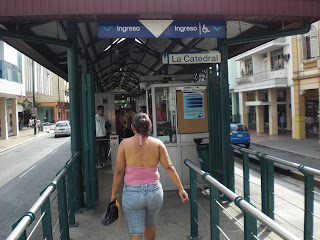 Easy to use fixed route maps: 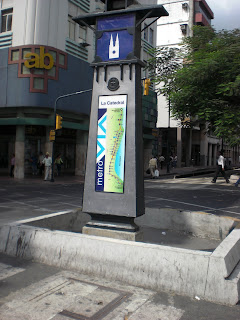 Parking Changes for the City of Tacoma

For a long time the City of Tacoma has required suburban style parking minimums for new developments in the entire city. This policy drives up the cost of housing, eats away at the walkable urban environment, and creates auto-dependency in an areas that are well served by transit. Thankfully, city hall is proposing to get rid of parking minimum and maximum requirements in the downtown core. A hearing on the proposed changes will take place on Feb 4.th at city hall at 5pm. Check out Dan Voelpel’s column reporting on the proposed change and making a compelling local argument of why this is a good policy move for the region’s second largest city.
Posted by Andrew at 2:57 PM No comments:

Every year the environmental community of Washington chooses four legislative priorities to put forward in Olympia. For this year at Transportation Choices, we are happy to partner with Futurewise as the lead organizations on one of those priorities entitled ‘transit oriented communities’. Representative Sharon Nelson is our House bill sponsor and Senator Chris Marr is our sponsor in the Senate. This legislation will ensure that cities take into consideration climate change when updating their land-use plans. It will also encourage walkable, sustainable, and affordable transit oriented development around high capacity transit stations (light rail, commuter rail, and bus rapid transit). Last year the Puget Sound Region made a historical 18 billion dollar investment in transit infrastructure. We want to make sure that we capitalize on that investment and plan well around the backbone of the region's transit infrastructure.

There recently has been quite a bit of blog chatter on the proposal. I suggest you read:

We are planning to have this bill dropped in the next couple of days. Stayed tuned as we keep you updated and what you can do to help.
Posted by Transportation Choices at 12:07 PM No comments:

Welcome to the blog

Welcome to the official Blog of the Transportation Choices Coalition. Right now at TCC we are ramping up for the upcoming legislative session. We will be working hard to pass legislation that encourages transit oriented development and on our other legislative priorities. Please stay tuned to this blog as we keep you informed on what we are up to in Olympia and how you can help!
Posted by Transportation Choices at 2:00 PM 1 comment: