Metro Cuts Hearing: Where in the World is Pete von Reichbauer? 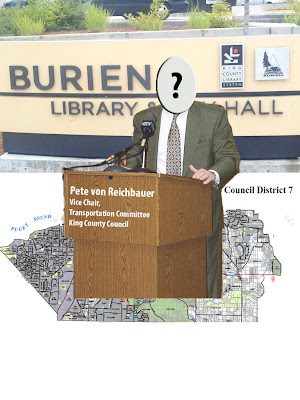 The next public hearing on the future of King County Metro will be at Burien City Hall at 6pm Thursday.

At the last hearing over 700 people lined the streets of Seattle supporting bus service in King County.  We expect a good crowd at Thursday's hearing as well.

A lot of participants at the Seattle hearing were upset that their representatives were not there (only the four dems who supported the $20 fee to save metro were there, since then Patterson has also come out in favor of it).

So the big question for tomorrow's hearing is, will the vice-chair of the transportation committee, Pete von Reichbauer from Federal Way, be there? We hope so!

See you all tomorrow at 6pm to support buses in at Burien City Hall!.
Posted by Andrew at 9:00 AM