You Did It: Buses Saved in King County

Councilmember Larry Phillips championed the cause to save metro by proposing the initial congestion reduction charge at the County Council. Thank you Larry Phillips, Executive Constantine, Joe McDermott, and the other five other councilmembers who voted in favor to save Metro buses. This was not an easy vote to take and we appreciate your leadership.

Send a thank you letter to the councilmembers.

We're in this situation because of out-dated state law that restricts local voters to only fund their transit service with the sales tax -- a funding source that is regressive, volatile, and declining.

Luckily the state legislature recognized this problem for King County Metro and gave the County Council a temporary stop-gap measure to adopt until the state comes up with a longterm, statewide solution.

The council has adopted the stop-gap measure, so let's take this time to celebrate and to thank our councilmembers.

Send your thank you letter now!

This wasn't possible without you. Together we signed and sent more than 15,000 petitions and letters. We made hundreds, maybe thousands, of calls into the councilmembers. And we stood in a two-block-long line for two hours in order to testify at a public hearing.

Together we saved our buses! 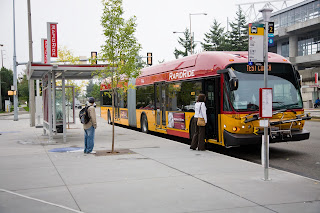