The Seattle Times has a in-depth Op-Ed today on Community Transit's soon to be opened SWIFT Bus Rapid Transit line.

For those of you who attended our visioning Town Hall in June you heard from SWIFT project manager, June DeVol, about the project.

I had the chance to tour the vehicles and the corridor with CT's director of government affairs, Todd Morrow, in the spring. I've posted the pictures from that tour on facebook here, check them out to get a sense of how SWIFT will feel and look.

As an organization Transportation Choices Coalition is excited for the opening of the SWIFT BRT project. I think more than anything this is a great example of how transit agencies can leverage local investments (the cities paid for the BAT lanes that will be for bus and right turn access only) and state and federal grants, to produce a high quality transit service.

As I was reading the opinion article I was worried that the light rail skeptic Seattle Times might turn a pro-BRT story into an anti-light rail story.

"Projected savings for BRT over light rail can be dramatic, and they were appealing in the middle 1990s as Puget Sound debated a regional transit solution. They came up again in 2005 as the community pondered phase two of Sound Transit. How to get across the I-90 bridge: light rail or BRT?

Early on, U.S. cities that embraced BRT went for separated guideways. Those plans — and eventual expansion — came with their own expensive right-of-way issues, same as light rail.

Thankfully, the piece alludes to the that long-term operating costs are on rail often justify the high upfront price tag and make more sense in many high density corridors (such as connecting Seattle to Bellevue over the Lake).

High-capacity rail is expensive to build but spreads those capital costs over a long timeline. Moving lots and lots of passengers along dense corridors makes the most sense. I do not see transit agencies hiring armies of bus and van drivers with medical and pension plans to cover.

Community Transit's Swift is truly a model of bus rapid transit, not simply shaving time off express bus runs. I want this effort to thrive and be instructive.

Dickie got it right. Washington State residents need more transportation choices across the board, that is why at TCC we wake up every day to deliver just that. We need fast, efficient, and easy to use BRT and light rail corridors across the state. Local BRT stretching down 99 from Tacoma to Everett would compliment a regional commuter rail and light rail system. People need more high frequency convenient transit, whether its to travel 2 miles down the street to the grocery store or 30 miles to visit family or commute to work. This fall I look forward to taking our first ride on SWIFT, Washington's first bus line with dedicated branding and right of way, hopefully other transit agencies can secure local and state funding in order to replicate Community Transit's Bus Rapid Transit Model. 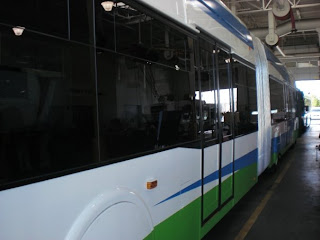